The 2022 Pat’s Pedaling Pack 100K Ride and Golf Outing raised more than $280,000 –  bringing the total amount of money this annual event has raised since its inception in 2014 to over $1 million dollars! This year’s ride was drew media attention from local outlets including The Chicago Tribune and The Beverly Review, and from the National Catholic Reporter — a true testament to the impact our riders and volunteers are making. Save the date for next year’s event, set to take place Friday, June 23, 2023. 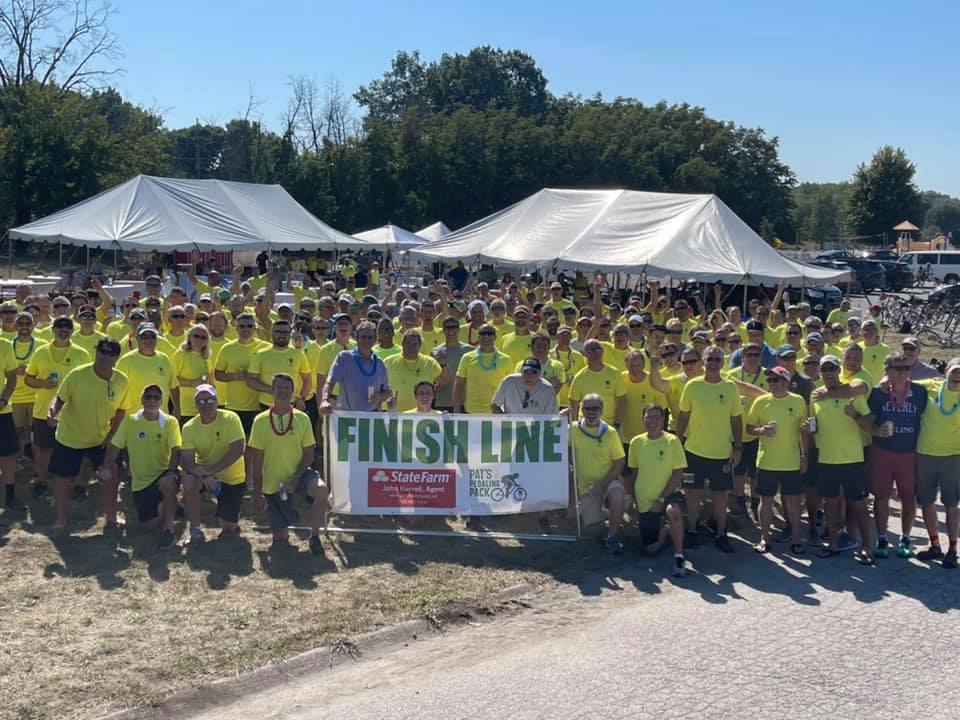 Thank you to everyone who made the 2021 Pat’s Pedaling Pack 100K Bike Ride and Golf Outing a tremendous success. Thanks to our riders and our numerous volunteers, ride sponsors, and golf sponsors. Everyone enjoyed what we believe was our best event ever and together we raised an incredible $240,000! This was a tremendous result and critical as we continue to fund brain tumor research and provide assistance directly to the families of young children who are battling cancer. The need right now is greater than ever due to the effects that the coronavirus has had on many families who have a child with cancer. Read more about our supporters, who we’re helping and more here. 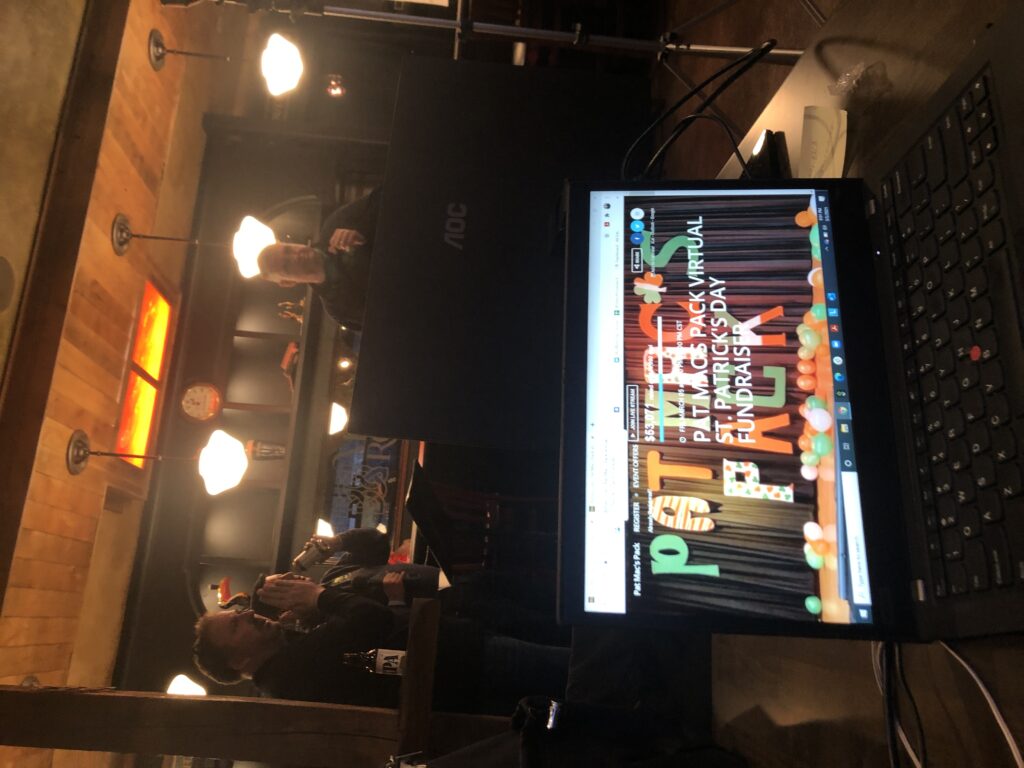 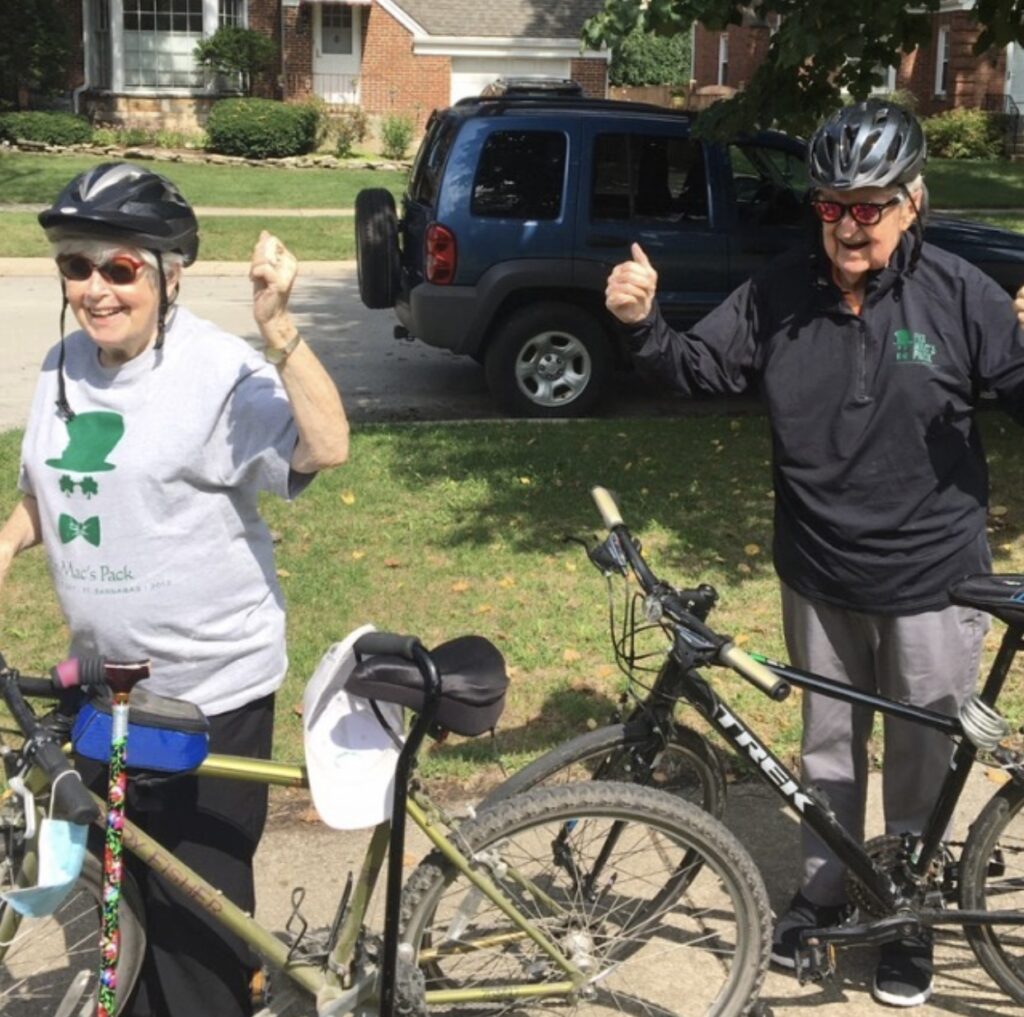 One of Pat Mac’s Pack’s signature fundraising events is our annual 100K group bike ride (that has attracted nearly 200 riders in recent years!). Like many events in 2020, we were unable to host the event as planned — but decided to ask riders and their families and friends to continue our fundraising tradition on the weekend of September 11-13, 2020 to “Pedal for Pat.” This was an invitation for supporters to plan their own ride route, day and time, but to take place on a single weekend and encourage those in their network to donate to the cause. In the end, 400 people donated to raise more than $60,000. 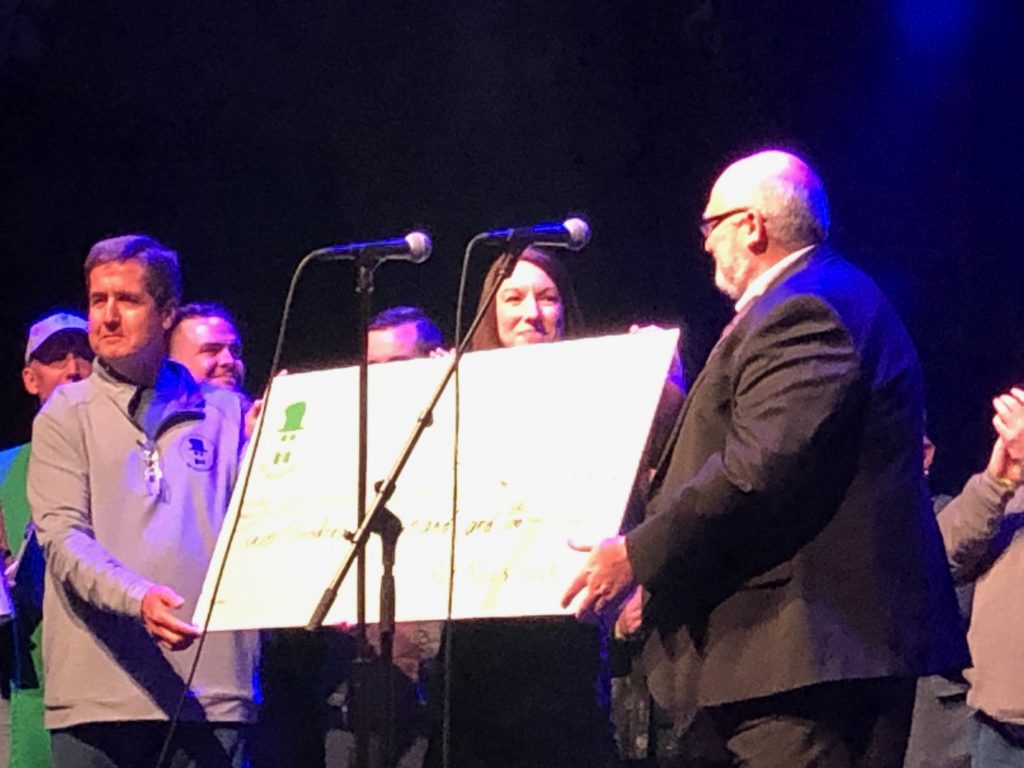 Pat Mac’s Pack launched into the New Year with a $200,000 donation to Lurie Children’s Hospital, which will support the hospital’s advancement of treatments to combat aggressive pediatric brain tumors, research and other priorities identified by the expert team at Lurie Children’s. The check presentation — our largest donation to date — took place at the second “FCK CNCR Fest” at Chicago’s landmark Thalia Hall, involving Pat Mac’s Pack board members, volunteers and representatives from Lurie Children’s, including Patrick’s doctor. 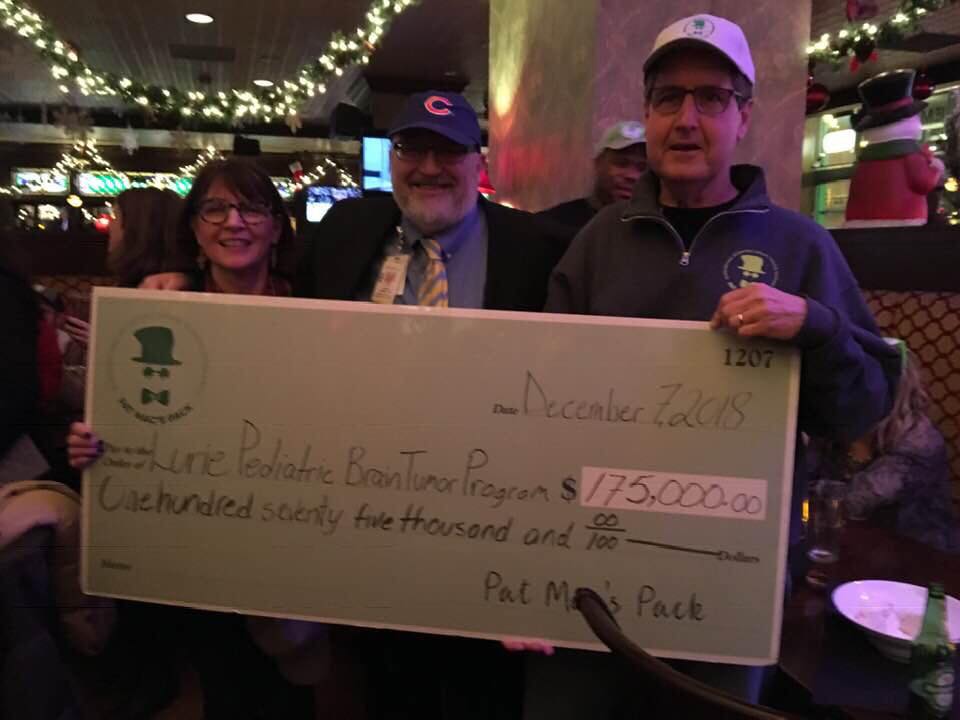 Patrick’s doctor with a $175,000 check for Lurie Children’s Hospital at the kick-off of an annual Pat Mac’s Pack holiday bar crawl — an event run by Patrick’s cousins and attended by members of the Pack. This year, the crawl raised $3,200 in a great effort to spread holiday cheer and raise awareness of the work that we do. Thank you to our committed friends and family for helping us end 2018 on a high note! 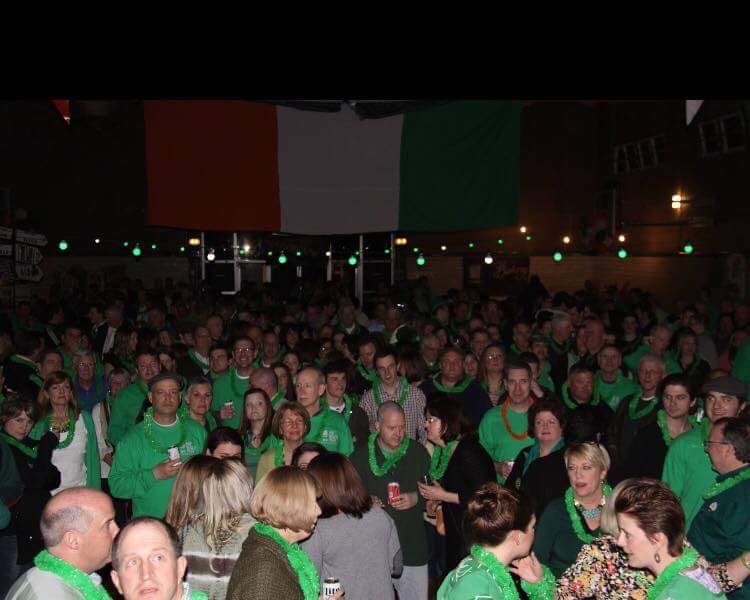 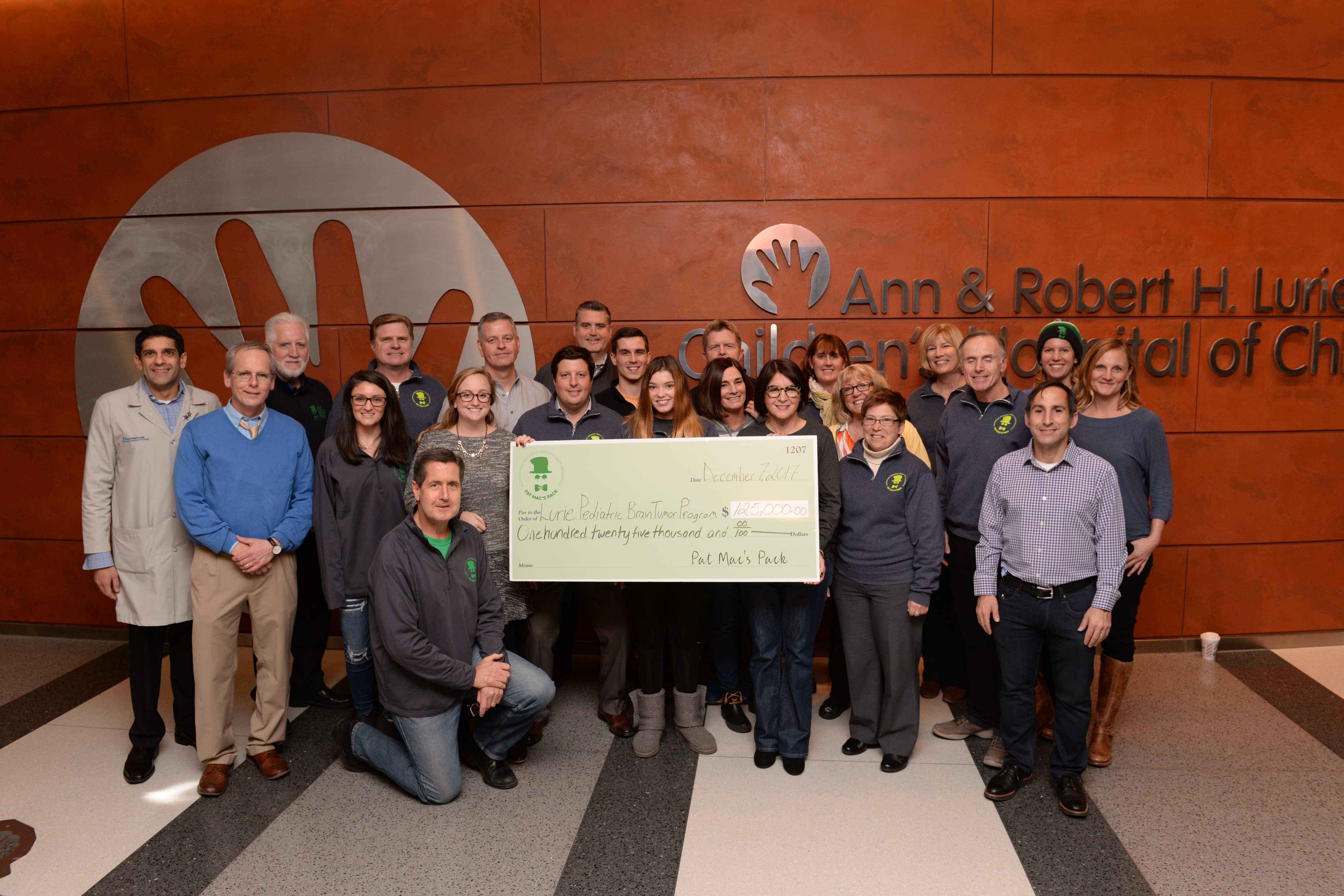 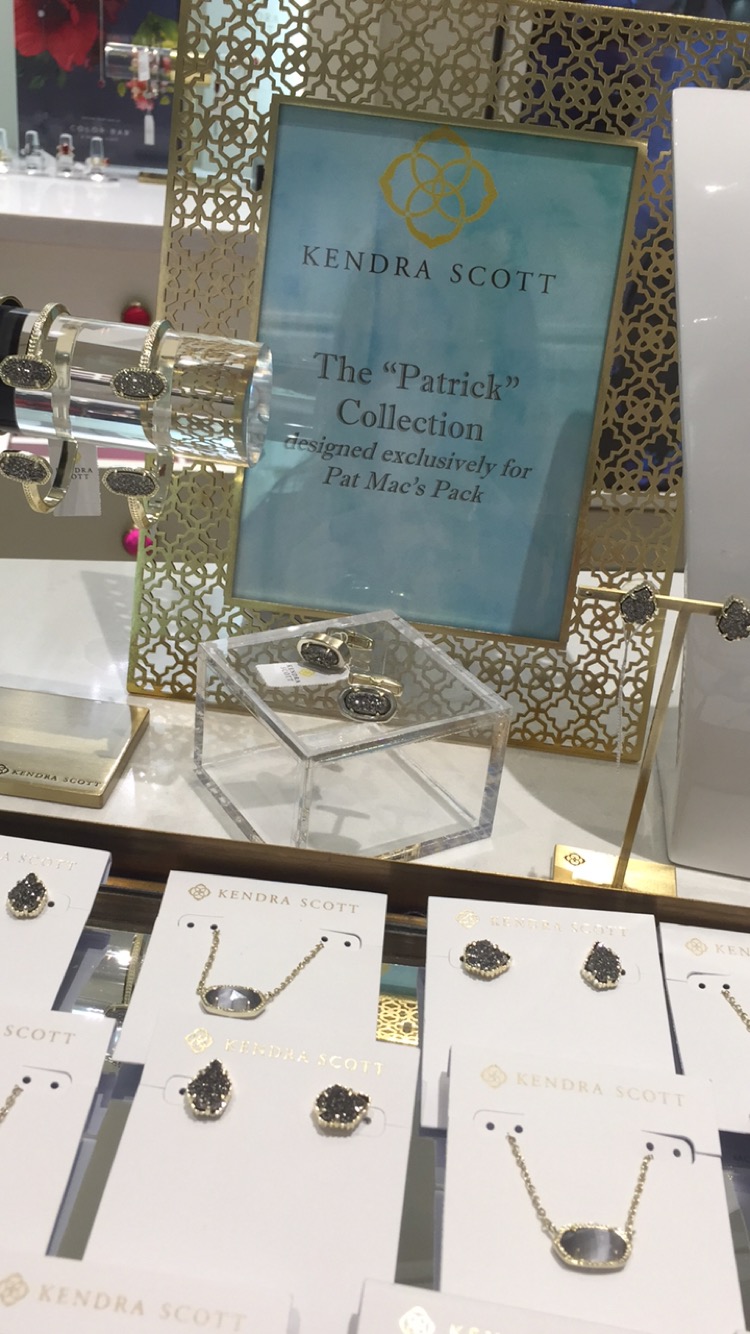 On September 14, Pat Mac’s Pack partnered with Kendra Scott for a “Kendra Gives Back” event. A shopping fundraiser was held at the Michigan Avenue store, where Kendra Scott provided complimentary drinks and appetizers and 20% of all jewelry sales went to Pat Mac’s Pack — including three pieces of jewelry designed by Dee McNamara using grey stones (grey is the color of pediatric brain tumor awareness). Thank you, Kendra Scott!

Pat Mac’s Pack Featured in DNAInfo
March 9, 2017
The sixth annual St. Baldrick’s Day fundraiser was featured in Beverly’s DNAInfo. Click here to read the story, which provides a great overview of the history of our organization and the roots of this fundraiser tradition. Downtown “Crawl for a C 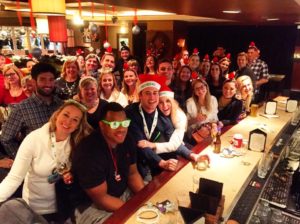 Third Annual “Trash to Treasure” a Success
November 17, 2016
For the third year in a row, Pat Mac’s Pack hosted the South Side version of HGTV’s Flea Market Flip — an event where people donate a repurposed or rehabbed item to be bid on and/or can purchase a unique piece to decorate a house, office, apartment and more. This year the event was hosted at Cork & Kerry and attracted approximately 175 attendees. From a vintage bracelet to a custom made bar, everyone left with something new to bring home, and Pat Mac’s Pack raised over $7,500. Check out some photos from the event in our gallery, here.  Pat Mac’s Pack meets with leaders to impact funding for pediatric cancer research
August 31, 2016
On August 31, Tom and Dee McNamara, along with members of other families of Lurie Children’s Hospital, met with Dr. Stewart Goldman, the National Institutes of Health Director Francis Collins and U.S. Senator Dick Durbin to discuss funding for pediatric cancer. 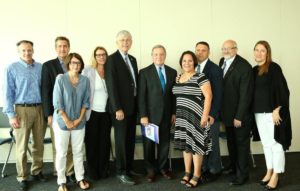 The main focus of this meeting was to encourage Senator Durbin and
members of Congress to pass the 21st Century Cures Act and to
reauthorize the Creating Hope Act, a pediatric cancer research priority review voucher program.

Update: On December 7, which happens to be the birthday of our hero — Patrick McNamara, Congress passed and sent the Century Cures Act to the President. Pat Mac’s Pack is thrilled to report that Obama signed this Act into law on December 13.

The August presentation was made at an event at the Tortoise Supper Club, which donated a portion of its sales the month of August to Pat Mac’s Pack.

Third annual “Pat’s Pedaling Pack” raises more than $55,000
June 24, 2016
On June 24, Pat’s Pedaling Pack hit the road for the third annual 100-kilometer ride from the South Side of Chicago to Long Beach, Indiana. Riders departed from St. Barnabas Church in the Beverly neighborhood on the South Side of Chicago and were led by Leaders Of The Pack Bradon Wiggins and Anthony Papayas. With more than 50 riders, the event raised over $55,000. View photos from this year, and past years, in our gallery by clicking here.